Sometimes roaring, sometimes peaceful, sometimes threatening, sometimes inviting: the Kamnitz is a master of transformation. On our hike through the Wilde Klamm and the Edmundsklamm in the Bohemian Switzerland the river accompanies us. Here, in the middle of the Czech National Park, we meet wild naturalness and cosy jokers.

Bohemian humor also works without verbs. When František Halbich speaks German, he follows noun after noun. “Attention, camera”, shouts the Czech with an accent as he glides through the Edmundsklamm gorge in Bohemian Switzerland. “Niagara waterfall, and points to a thick rock from which a cute trickle flows down. We look disbelieving. But František – red jacket, brown ranger hat on his head – has a surprise in store. He pulls on a leash hanging on the opposite bank. Suddenly the trickle swells to a mighty surge of water and pours into the peaceful Kamnitz with thunderous noise. For a few seconds. Then the fun is over.

It is part of the tradition of these boat trips in Saxon-Bohemian Switzerland that the gondolier not only stands silently, but also amuses the guests. Even if the dramatic scenery of the gorge with the high rock faces to the left and right and the up to six meters deep water offers enough entertainment. Metre by metre, he steers the radiant green barge through the rocky gorge, pulling a new joke. First in Czech, then in German.

He points to the bottom of the quiet river: “Water: Piranha, Crocodile. Name Crocodile Dundee.” The passengers are smiling. In fact, not the predatory fish and reptiles from the tropical waters have settled here, but real salmon. Until the 1920s the Kamnitz, a tributary of the Elbe, was famous for its abundance of fish and salmon. But because mills and sawmills use and pollute the water intensively, the salmon disappeared. Since the end of the 1990s, the national park administration has been trying to ensure that the fish return.

We drive about 20 minutes through the wild and romantic fairytale world in the middle of the Bohemian Switzerland National Park in the northwest of the Czech Republic. To say goodbye, the ferryman gives another instruction: “Ladies left, men right”, he says and shows the way to the exit from the barge. The one for the men goes straight into the water.


On the forest path to Kamnitz

Dana Štefácková from the Ceské Švýcarsko o.p.s., the non-profit association Bohemian Switzerland accompanies us. She is our hiking guide and translator. It’s a good thing that we have them with us today, on a summer Monday morning in the spring month of April. This is our hiking trail from Mezní Louka to Hřensko through the gorges Wilde Klamm and Edmundsklamm. not only for the senses, but also for the mind.

Dana – beige hiking trousers, red waistcoat, red outdoor jacket – takes a firm step right at the beginning. We walk from the car park in Mezní Louka with its “Prebisch gate for children”, a wooden model of the most famous landmark of Bohemian Switzerland, along the blue marked forest path to Kammitz. Below us roots, needles, stones, above us birds twittering, spruce green, summer breeze. 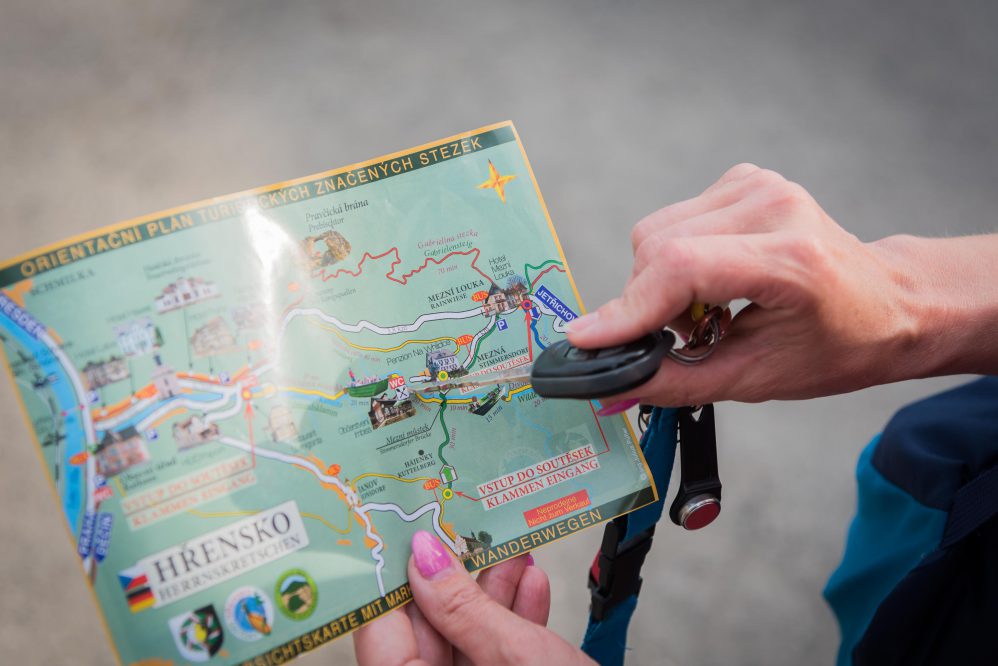 A brochure facilitates the overview. Even with times!

After 20 minutes we hear the river rushing. The Kamnitz comes with roar from the left from the core zone of the national park. We follow their flow direction on the yellow marked path through the Wilde Klamm. It was not until Easter that the path was reopened after extensive construction work. The old iron grates were replaced by new wooden beams. We run over old, flat stone slabs. “I’m this way,” says Dana. He recalls the past, the arduous development of the gorge. In the winter of 1889, Prince Edmund Moritz had a promenade built by Clary and Aldringen under the leadership of Italian experts. 200 workers blew up the rocks with dynamite for passageways, built footbridges and a weir. In May 1890 the first barge went through the gorge, named after its promoter, and nine years later the Wilde Klamm also opened in 1898.

There, where the mighty rocks stand close to the water, we walk through the gorge on wooden galleries clinging to the rock face. It is a mystery to me how they were able to fortify the workers here in the middle of the national park. Steep below us the Kamnitz washes around mossed boulders. A hiker in a striped sweater overtakes us. It’s the first one today. Low season.

I stroke my hand over the rough sandstone next to me, getting caught in the places covered with bright yellow sulphur lichen. “That’s a good sign,” Dana explains. “That means we’ve got good air here.” Spider webs run over the holes in the sandstone, which sometimes look like honeycombs. Water and wind shaped them that way.

We arrive at a tiny, green-red painted wooden cottage with a white Windows. White smoke rising. It fits perfectly into this idyll.

The man who steps out of the cottage is the epitome of Bohemian cosiness. Round, friendly face, white hair, belly. I’m thinking grandfather from Johanna Spyris Heidi novel. He introduces himself to us as Jiří Růžicka . Růžicka means little rose, reveals Dana. Jiří gives us a hand to get into his barge. Silently we glide 500 meters over the one to three meter deep Kamnitz through the Wilde Klamm. This ferryman also knows the stories that belong to the rocks.


With the Kahn through the Edmundsklamm

We continue through dark rock tunnels, always along the river. After half an hour we reach the excursion restaurant with the permanent exhibition “From the mill to the log cabin and back”. This small show describes the beginnings of tourism in the Elbe Sandstone Mountains. Inside, photocopies of the construction of the Panoramaweg in 1890, old postcard motifs, a wooden relief, a mill wheel, a camera obscura. Outside there are benches, tables and a fireplace for frying sausages. A museum tour and coffee later, we sit in František Halbichs Kahn through the Edmundsklamm. The ferryman with the ranger hat navigates us close to the rocks. “Hands off. Hands in your lap. Everyone in his, please.”

After a 20-minute walk downhill along the wild river we reach our destination: Hřensko. Here, in the Soutesky restaurant, we would have to eat Szeged goulash, smoked meat with cabbage and potato pancakes or trout with boiled potatoes and drink a cool, Bohemian beer from the barrel. Maybe next time. Dana and also we have to go back: view the photos of the Niagara Falls and put František’s noun sentences on paper.

photos:
all photos in this blog article © Sebastian Thiel, ThielPR